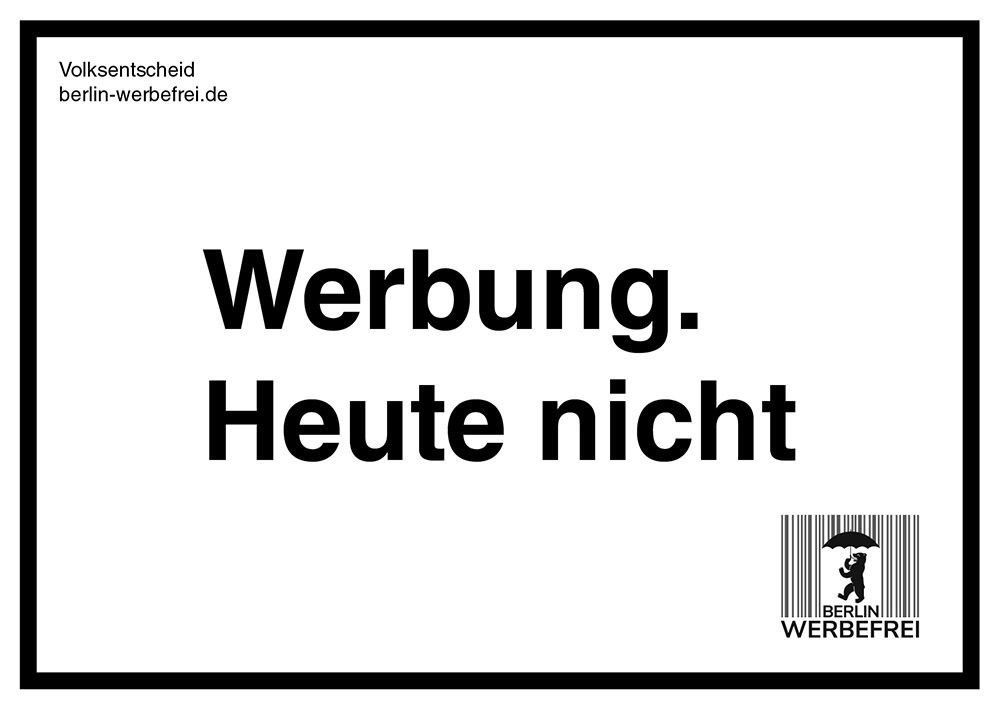 Posted at 12:32h in Uncategorized by Nora Dohles 0 Comments

Consumption is the heart of our economy: it keeps the capitalist system running and promises well-being. The market is constantly producing products that we do not need – and still believe we have to buy. Thanks to advertising, we know that a car means status, the make-up sex appeal, a chocolate candy friendship and long-distance travel uniqueness. What can we counter to the advertising machine of our growth culture? And what do others do to stop the visual pollution caused by advertising?
Today is Black Friday. In the US this is the highest sales day of the year. People are already waiting at night in long queues in front of the shops to get so-called “doorbusters” (bargains). Since it is clear that the Internet will probably prevail after all, on the following Monday, there will be Cyber ​​Monday, where online retailers advertise seemingly unbeatable discounts. Fun Fact: The discounts often do not come from the actual market price, but from the non-binding price recommendation. Compared to competing providers, instead of the advertised up to 90% discount, only 10 to 25% discount is realistic.

The 1990s were characterized by the outsourcing of production and the focus on brand policy. Result: the public space was increasingly paved with advertising. Today, 1% of GDP comes from advertising. Advertising creates unhealthy needs and especially hits those who can not defend themselves: children. As a potential target group, they are particularly attractive because they are the consumers of the future and are still at the beginning of a long consumer career.

As a counterpart to Black Friday will be on 25.11. the #NoAdDay celebrated on the symbolic publicity is removed. “No Ad Day” is about controlling the oversaturation of our minds and our environment through commercial media. So we can approach our needs more meaningfully and productively. Alternatively, one can also celebrate the “buy-nothing-day”, introduced in 1992 by artist Ted Dave, to boycott the problem of overconsumption.

Adbusting and other sufficiency strategies

I like the word sufficiency. The term comes from the Latin (sufficere = sufficient, suffice) and stands for “the right measure” and sustainable consumption. Example: “The reduction of resource consumption enables a sufficient & good life.” The renunciation is not a step backwards, but future-oriented and unique course of action. The calculation is simple: there can be no infinite growth on a planet with limited resources. Unfortunately, there are humans, no name dropping here (hint: his name is an anagram for Mad Lord P. Nut), to whom this mathematical consideration already seems too complex.

“… the whole advertising industry […] does not make sense any more in a world where consumption is becoming a major problem.” Kalle Lasn, 2007

The human eye is triggered by light and motion. Repetition provides confidence. The advertising industry benefits from massive “street furniture”. Ströer and Berliner Stadtwerke officially use this term on their websites. Sounds also much cuter and harmless than visual pollution.

“Is not the best subversion to distort codes instead of destroying them?” Barthes, 1980

That’s what the adbusters thought. Adbusting criticizes consumer capitalism by recoding, alienating or over-identifying outdoor advertising. A popular technique is called sniping, where individual words of an advertising slogan are pasted over. For example, “shop” is simply turned into a “stop”. 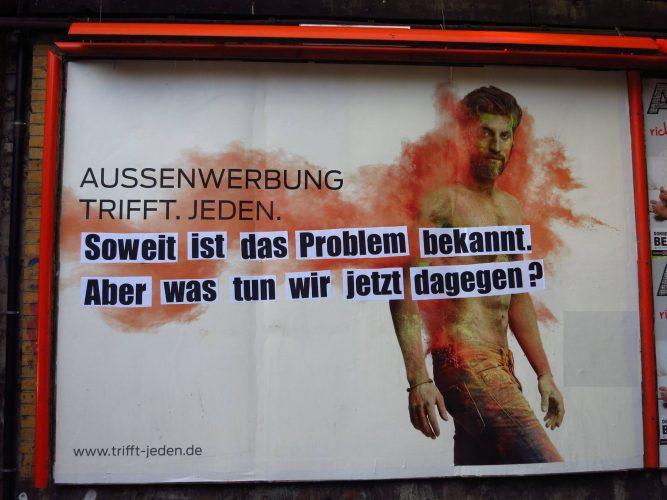 The initiative Berlin Werbefrei goes one step further. It wants to bring a referendum through a new law, so that the capital is freed from outdoor advertising. This would make Berlin the second city in Europe, after Grenoble in France, which completely refrains from outdoor advertising. After the law has been implemented, only publicity advertising and event advertising that must be specified with location and time period would be permissible. The most important argument is the keyword health: light pollution, stress, depression, stands on the side of the association. Although the advertising industry always argues in the direction of the citizens, it pisses itself off, as the focus is always on the product to be sold. The task of the state is to create framework conditions in order to curb monopolization and distortion of competition.

Interesting for me is the emerging myth of the counterculture: so if the enemy takes possession of your weapons. Advertising agencies subscribe to adbusting magazines as “inspiration” and advertise themselves, which mimics the adbusting style. For example, companies like Starbucks, who use the mechanisms of shitstorms, are making things even worse by designing planned negative PR. Because we know that every PR is good PR.

What do we really need?

I’m ashamed of our culture, where shopping is a hobby and the most successful German TV format consists of a chubby fashion designer who comments on shopping-mad women rushing hysterically from store to store to create the perfect retro vintage look for the run on the catwalk. What a life-changing challenge that has to be, to decide between make-up or styling when the money is not enough. #lifestruggle.

Would not it be great if you did not have to worry about the vacation you can not afford, the car we do not need or the body we do not have? Imagine a world where outdoor advertising would make you feel good. If I want to buy something, then I put it on a list. If I still think it’s good and worth the money after 30 days, then I’ll buy it first. Is the article then sold out or not available in my size? All the better, then I’m glad that I have saved money.